I DON’T EVEN KNOW IF I CARE: how youth segment around County Governance in Kenya [ARCHIVE]

Early in 2015, we spoke to young people all over Kenya about how the devolved government and new county administration is working for them. This was part of an extensive GroundTruth study we were working on for the World Bank. We staged qualitative interviews and groups discussions and we held open community debates with young people in multiple locations. We cross-checked what we heard from youth with local government officials and gatekeepers. By asking adults to comment on the same issues we began to see for ourselves the tensions between the official world and the daily experiences of young Kenyans. And by these means we began to see how young people take several clear and different positions – different segments – regarding government and institutions.

What we heard allowed us to develop five different personas representing the key youth perspectives and behaviours we’d learned about. Perhaps no one persona or segment was a big surprise, but taken together, and placed on our Rejection Scale they provided a clear new perspective on youth and government that we couldn’t find anywhere else.
Viewing in this way, our segmentation helps us see where the opportunities, energy and risks are in the system, and consequently where reform and persuasion efforts must be focused if young people are to ever take their intended democratic role. This insight can be used to inform future efforts to engage more youth in the processes of government – a challenge that we’ll be tackling in Shujaaz, and with partners. 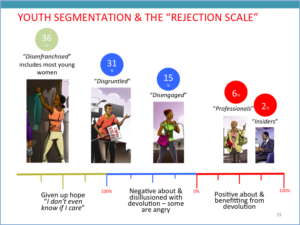 After our GroundTruth research identified the key segments, we tried an experiment to cross check our insights. After illustrating the key segments as characters – using a participatory creation process – we then incorporated these characters in an edition of the Shujaaz Kenya comic book and social media pages. There we asked the audience to respond if they identified personally with any of the segments. Hundreds of young people wrote in, many sharing their excitement on seeing themselves depicted, and their connection with the story and the issue:

“I identify with Disenfranchised [called Apan Taka in the story] because if I leave my work and join the rallies, I am the one who will sleep hungry. That politician is paid a salary. How about me? Who pays me?”

“I like Disgruntled [aka Tetea Raia] because he is doing right. The thing is, politicians cannot be trusted when it comes to caring for the people’s welfare. They are just greedy!”

“Disgruntled IS THE MAN! Insider[aka Right Man] only cares for himself. Professionals [aka Linka] will give you a hundred bob but that is not enough for ones life. One has to get good services from the government e.g. health, education, proper sewage management and waste disposal. Nkt, Disenfranchised [aka Apan Taka] is a fool because he believes that politics doesn’t influence his life but forgets that good politics means good life. The government makes important decisions like amount of tax on businesses. Disgruntled [aka Tetea Raia] is on point! He fights for his rights. Disengaged [Life Lava] is a jerk! She is like the girls in Runda who pretend to be Caucasian as if Runda is New York. Just because they have good life, it does not mean the government is doing a good job. These are the Shaniquas and Chantelles, feeling all sweet!”

The informal quantitative survey exactly confirmed our GroundTruth observations in the field – only 8% of young Kenyans identify with the Professionals and Insiders, those who feel they’re benefiting from devolution; the majority say “I don’t even know if I care”.

10 insights from our first 10 years

“Mic Yetu”: Reshaping the discourse on governance, participation and transparency among Kenyan youth

SHUJAAZ SAVES THE DAY: when police harassment gets real [ARCHIVE]

Shaking Up Politics With A Handshake [ARCHIVE]