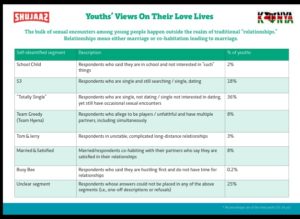 If Facebook had been invented in Kenya the status update “It’s complicated” would never have passed muster as a measure of romantic fortune.

Nor would “single”, “married”, or “in a relationship” do justice to the lives of the smartphone savvy youngsters – a fifth of Kenya’s population – who spend 20% of their meagre incomes on internet bundles and airtime.
In the patois of the Kenyan slums – a blend of English and Swahili known as Sheng – their relationship status might be Tom and Jerry or Busy Bee, Team Hyena or S3.

Tom and Jerry refers to unstable, complicated long-distance relationships, and account for 3 per cent of the country’s 15-24 year olds, according to research by the makers of the country’s most popular comic Shujaaz.
Busy bees (0.2%) are hustling for money – which makes three them three times more than working in the formal sector – but they don’t have time for love. Team Hyena (8%) are the players, with multiple partners simultaneously. S3s (18%) are single and still searching.

Most described themselves as “totally single” (36%) but even that is misleading, as 31% of them are sexually active as well.

One of the most common kinds of lover was a “sponsor,” who is someone of means who helps their partner buy smart clothes, usually in exchange for sexual favours. A third of young Kenyans have or know someone with a sponsor, while 65 per cent said it was OK to have a sponsor while in another relationship.

The most desirable women are Dame90s, so-called because they can make their suitors wait 90 days to have sex.

Kenya has 8.4million 15-24 year olds, a fifth of the population, but 36 per cent of them are so disenfranchised they “don’t even know if they care” about politics.

A million become jobseekers each year, but the economy can only cope with 6.5-10 per cent. The rest “hustle” in the informal sector.

Only 3 per cent of 15-19 year olds wake up each day with enough money to cover their basic needs, according to the comic’s makers Well Told Story. That figure rises to 4 per cent among 20-24 year olds. Most have to make a compromise between paying for travel or food.

Jerome Starkey is Africa Correspondent at The Times of London