CAN WE SEE NEW NORMS FORM? New tech means we can not only watch the process but also understand and influence it [ARCHIVE] 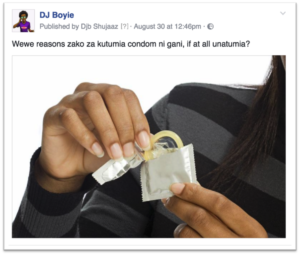 Of late, DJB, the main character in Shujaaz Kenya, has been leading a lot of conversations around relationships, sex and protection – and this seems to be rubbing some of the fans the wrong way.

Here is an example: On August 30th 2016 DJB posted :“If at all you use condoms, what are your reasons for using them?” (see the screenshot above) The post attracted 423 Likes and 168 Comments from among DJB’s 350,000 Facebook fans.

Most of the audience comments were from fans talking about how condoms are for protection against unplanned pregnancies, sexually transmitted diseases, and also how condoms can be a sign of love, because they’re a sign that you care about your loved one.

Some fans, however, did not feel that DJ B should not talk about condoms, relationships or sex – see for example this comment from Kevin: 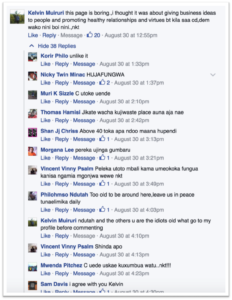 In his post Kelvin M. wrote: “This page is boring, I thought it was about giving business ideas to people and promoting healthy relationships and virtues. However all you do nowadays is talk about condoms and relationship stuff, why?”
Clearly, Kevin does not approve of the topic and, possibly, of the position taken by DJ B. What next? DJ B did not immediately reply to Kelvin, but as you can see from the screenshot of the conversation, within 3 hours 44 of DJ B fans felt compelled to comment on his behalf. Some of their comments included:

“You know you have the option to leave”
“Just unlike the page
“Why are you wasting your energy on a place that’s not serving you?”
“Why are you acting like a child?”
“Maybe you are too young to be here, some of us are getting educated on a daily basis, please leave us in peace”
“No one forced to like the page, if you do not like the things DJ B is talking about just unlike the page”
“Do you mean to tell us that the only CDs [condoms] you know are DVDs?”

This exchange points to a new trend we’ve started noticing in our online and offline audience engagements – the emergence of a new collective position among Shujaaz fans that suggests that (a) our fans are becoming tighter as a group not just as a collection of individuals, and (b) our fans are developing a shared narrative in which contraception is a topic that is relevant to their life and for some it is even turning into a positive topic.

This shift towards relevance of contraceptives as well as positive attitudes towards contraceptives shows that our audience has come a long way from earlier Facebook conversations, which frequently saw Shujaaz fans taking a very different – very negative – position:

“It is not allowed for a lady to carry a condom. This shows that the lady is a prostitute”
“Those who carry condoms are prostitutes so they can protect themselves against HIV aids issues’

These anecdotes and observations give us a high-level view of a possible shift in the larger Kenyan Youth Discourse – but while the signs are encouraging, there questions that remain: how do we know if the same shift in discourse is happening at a larger scale beyond the 45 self selected DJ B fans in the online conversation? And what does this shift mean for Shujaaz and for our goals of helping young people make better life choices? Answering these questions requires an additional type of analysis – only large-scale quantitative data, so-called Big Data analytics, can add another layer of insight and contribute to Well Told Story’s pursuit of “Capital-P Proof” of influence and social change.

Until recently, such large-scale quantitative analysis of trends in the Youth Discourse would have been unimaginable. However Well Told Story’s 2-year-old collaboration with Africa’s Voices Foundation at the University of Cambridge has led to the development of a unique new tool, which can now help analyse online conversations with ever-growing precision. Our first trials in applying this tool to the millions of on-going digital media exchanges among hundreds of thousands of Shujaaz fans has resulted in new and encouraging insights into exactly how collective discussions can lead to massive normative shifts among youth in East Africa.

Beginning with an analysis of DJB’s text message database, Africa’s Voices set out to isolate every unsolicited SMS message, sent over a three year period, that mentions contraception directly (no simple task when the principal SMS language of Shujaaz fans is the spoken slang dialect called Sheng).

According to the analysis by Africa’s Voices, between June 2013 and June 2016 Shujaaz fans sent a total of 73,165 text messages specifically referencing the topic of contraception (Figure 1). As it turns out these conversations grew in number over time, which the velocity escalating in the past year. Back in July 2013 DJB received 343 unsolicited text messages in which a direct reference was made to contraception. In July 2016 DJ B received 4,926 contraception-themed messages – an increase of 1336%. So clearly something significant shifted in the topicality of the subject during this time: more and more young people joined the Shujaaz family, found the issue of contraception relevant to their lives and felt compelled (and safe, not judged) to share their views on contraception with DJB – strong data to support our anecdotal evidence that the youth conversation around the conversation on relationships and contraception has been evolving. 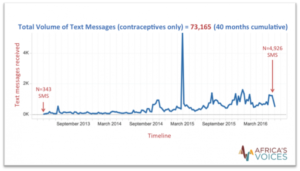 Having established the size of the conversation about contraceptives, Africa’s Voices scanned the data again. This time they looked for evidence of trends in audience sentiment, trying to answer a number of key questions, among which: were the conversations/ messages around contraception positive, neutral or negative? Were the views of Kenya’s youth evolving together with their interests?

This task meant a major joint effort between Africa’s Voices and Well Told Story, which began with the creation of word banks of Sheng (the informal mostly spoken slang used by Kenyan youth, especially online) vocabulary, then coding words and word-combinations in a specific manner and then “feeding” data and codes to the Cambridge-based computers, so they could accurately analyse the content of every contraception themed message and accurately score each based on:

Again the findings are striking: back in 2013 the number of contraception-themed messages grew month-on-month at an average rate of 17.3 messages each month. Of these 9.4 messages (54%) spoke negatively about contraception while only 7. 8 (45%) were positive (Figure 2). 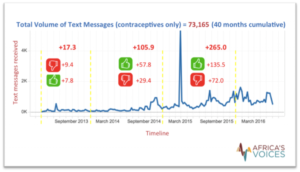 By 2015 that story has changed completely: month-on-month growth in contraception messages has increased to 265 additional messages on average per month (excluding positive outliers), of which 72 (27%) are negative and 135 (51%) are positive (the remaining messages are neutral).

So not only has youth engagement in contraception grown significantly during the three years of Shujaaz’s stealthy, stigma-busting, pro-contraception campaign, but it appears the sentiment of the overall Youth Discourse has also changed significantly to the positive during the same period: more young Kenyans are speaking openly about contraception, and the fast growing majority express positive opinions about it.

There are two more aspects of the message sentiment that we can now explore thanks to our collaboration with Africa’s Voices: explicit vs. implicit references to contraceptives and 3rd vs. 1st person narratives in the experiences with contraceptives reported by Shujaaz audiences. Based on the analysis of Shujaaz fans’ digital conversations, we see positive shifts in both of these areas as well.

As an example, let’s look at these two messages:

“Is a guy supposed to carry protection?”
‘I have a grlfrd, she hate cds [condoms] but I want to use them, what can I do?’

The first message is narrated in a 3rd person (a guy) and has an implicit reference to contraception (protection) placing the message sender at a distance from the issue, which they cannot even openly name. The second message explicity references condoms and is narrated in the 1st person: “I want”. What does the shift from message #1 to message #2 mean in terms of overall tonality of Shujaaz audience conversations? Dr Claudia Abreu Lopes of Africa’s Voices explains:
“[our research] shows that explicit conversations are more common and that they are increasing at a higher rate than implicit conversations. This may signal an increase in the familiarity/experience with contraceptives. The increase in explicit conversations suggests that Shujaaz’s audience is becoming more comfortable and motivated to talk about contraceptives and that these conversations are being ‘normalised’ (i.e. less taboo).”

Additionally, a shift from a 3rd-person narration to a 1st-person narration means that the sender realises relevance of the issue to them and verbally bridges the distance between the issues and their lives. This shift might also signal that Shujaaz audience feel comfortable discussing their personal lives because they know that Shujaaz community is “safe” – i.e., they are not going to be judged.

While this exciting analysis of trends in Shujaaz’s digital conversations suggests positive effects from exposure to Shujaaz media on attitudinal and normative change related to contraceptives, it does not allow us yet to establish causality – we cannot know that Shujaaz alone created the change we see in digital conversations our audience members have on FaceBook or on our SMS platform. Even though we can link the spikes visible in audience feedback to specific pro-contraception stories or events organized by Shujaaz, there are many, many other factors at play in the influence of young Kenyans, and the data we have cannot allow us to claim that Shujaaz alone is responsible for the positive trends.
However, as Dr. Lopes writes about the shifting Youth Discourse visible in the Shujaaz data: “the discussions show that the social norms are being challenged and negotiated. Taken collectively, this creates an environment that allows new social norms to emerge, setting the stage for actual behavioural change.”

As a follow up to our Big Data analysis of digital conversation, Africa’s Voices and Well Told Story are now designing a digital randomised control trial study to begin in 2017 that will attempt to isolate the specific “causal” effects of Shujaaz.

10 insights from our first 10 years

ICT4D: They say, billions of dollars will be unleashed by the global digital economy in the next 3-5 years [ARCHIVE]

#oopsex and youth views on love, sex and relationships

“Humanity will change more in the next 20 years than in the previous 300 years”. [ARCHIVE]